In 2001 a coalition of community organizers, non-profits leaders, and health care providers came together with a vision to create a multipurpose space focusing on the housing needs of LGBT elders in the greater Seattle area. It was one of the largest proposals of its time, aimed at helping LGBT senior citizens thrive. Unforeseen obstacles prevented the project from gaining leverage, leaving a void in the LGBT senior support realm.

Instead, proponents took a new approach and established the Northwest LGBT Senior Care Providers Network in 2010 to develop practice standards for organizations that provide services to older adults (assisted living, home care, transportation, etc.) to insure that they are welcoming and respectful to the LGBT community.

On June 7, 2011 members of the LGBT community came together at The Central to create a vision for their community that would help support them as they age. Louise Chernin, Executive Director of the Greater Seattle Business Association (GSBA) facilitated the gathering, hosted by Sound Generations.  Action Team Volunteers previously formed by the Elder Summit and other agencies gathered after robust discussions on what we want our community to look like in the future. Anne M. Jess, The Doodle Biz, created a graphic illustration to capture the vision. 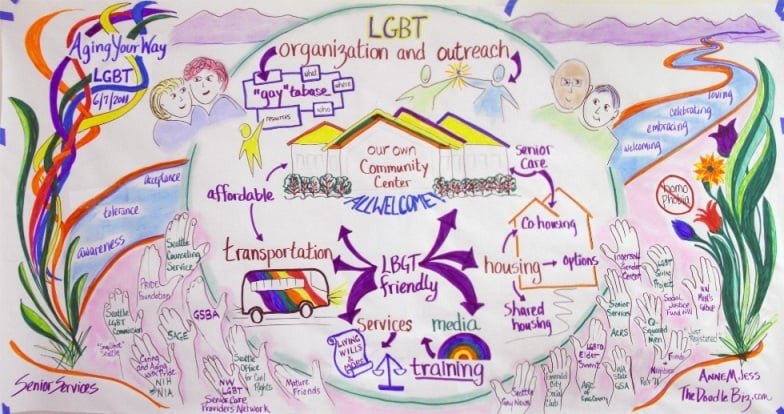 The Northwest LGBT Senior Care Providers marched for the first time as an organization in the 2011 Pride Parade, the 37th annual Pride Parade celebrating our LGBT community.

We have grown stronger every year since 2011. You can move throughout our pages to see our accomplishments.

In the spirit of our founding, and to foster its ambitions, our members adhere to the following Non-Discrimination Agreement:

Note:  Organizations that provide housing services must include sexual orientation and gender expression/identity as part of their fair housing non-discrimination policy when publicizing information about their company, including languages other than English.

Note:  Organizations may target services to a specific population when targeted groups require specialized programs to meet specific needs not shared by the general population. Additionally, an organization may provide targeted programs or services to redress current or past discrimination against a group.”